This latest road trip is through the Great Plains.

I started out from Cincinnati and got as far as Monticello, IN where I spent the night. There is a beautiful little city park there.

I spent some time on Route 66 in Illinois which you can read about here.

Driving through Iowa and Nebraska was …um…boring. There’s lots and lots and lots of fields. But at least the clouds provided some scenery. 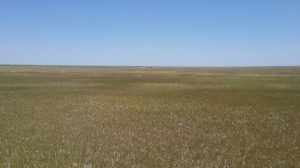 Next big stop was the Black Hills of South Dakota. Mount Rushmore is located deep in the forest, up a few mountains. (Why can’t they put the good stuff at the bottom of a mountain!?!)

It was as impressive as I expected. 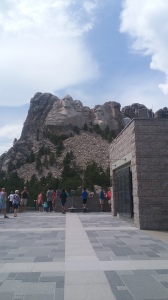 And there is other stuff to see there. The sculptor who created the monument, Gutzon Borglum, had a studio nearby where he worked on smaller versions to show the workers how to sculpt the rock. He lived there for several years as he oversaw the project.

The day after that, I turned back east. I stopped at Wall, SD where there is a drug store. Wall Drug has been a tourist attraction for as long as I can remember. And “tourist” says it all. It’s one big mall with a western theme. Many shops – and yes, one is a drug store –  loaded with Western clothes, books, gear, souvenirs, and whatever.

The road runs up and down the hills and through all the rock formations.

There are many points of interest where you can park and look out over the canyons. One was a place that explained the fossils found there. I didn’t know that modern paleontology began in the Badlands when a fossil of an unknown animal was found there in the mid 1800’s.

One thing I did not do was walk the trails. It would have been really interesting to wander through the formations, but it was 100 degrees that day and no way was I going to spend hours in that sun!

After more driving, I landed in Walnut Grove, MN. If the name sounds familiar it’s because that’s the town where Laura Ingalls Wilder lived in the book and TV show Little House on the Prairie. There is a museum all about her life. It includes information on all the places she lived. And I had forgotten that she became a writer long before she wrote the books. She was a journalist writing about farm life for newspapers and was nationally syndicated before she decided to write her own life history.

And now I’m headed home to give Vincent a good rest.

One thought on “Westward”