Sunday, April 2 – I spent the night at Mark Twain Lake State Park. It’s just west of Hannibal, Mo where Samuel Clemens grew up. The park includes the village of Florida, Mo, where he was born.

Since the season just started, there  was only one other campsite occupied. The people there came over and invited me to supper. They had cooked a big pot of chili and said they thought I might be lonely and wanted to share. Kim, her husband Topper, and Kim’s mom Edna were thrilled that I accepted. We had a lively dinner conversation and enjoyed their 2 dogs’ antics. Kim had just retired before I did, and since Topper is still working, they do short weekend trips. We compared notes on places to go and the joys of retirement.

Monday morning I went to the State Park museum. Mary Ann, the ranger who runs it,  let me in early cause I got there a half hour before it opened. She told me come on in since I was already there. It’s an amazing place. They have the original house where he was born. He lived there for 4 years before the family moved to Hannibal. It has interactive displays about his life and works, and a very good movie. It also has furniture from his homes.

I spent another hour wandering the park. The land had been designated a State Park in the 1920’s with the help of Clemmons daughter. It’s along the Salt River, with the lake being formed by a dam built in the 1950’s. 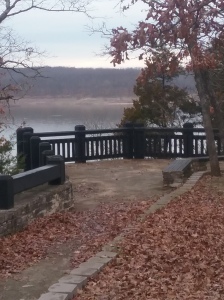 After that, I got back on the highway and headed into Hannibal. There is a Mark Twain Museum there also, along with the house he grew up in, The cave from Tom Sawyer is nearby. but it rained all afternoon so I stuck to the indoor stuff. This museum was as good as the first one. Many more displays about  his books, lots of stories recounting his youth,  travels, and family, more historical information about the times he lived in, and a special exhibit of Norman Rockwell paintings from his illustrations of Tom Sawyer and Huckleberry Finn.

Then, right across the street was the Hannibal Museum. Did you know that Clemmons is not the only famous person to have lived there? Cliff Edwards was a performer known as “Ukelele Ike” and was the voice of Jimminy Cricket in Disney’s “Pinnochio.” And Maggie Brown, who you may know as “The Unsinkable Molly Brown,” (She was never called Molly, that was made up for the musical) was born and grew up in Hannibal.

It was a most satisfying day.