This week I am at home still clearing out the apartment. 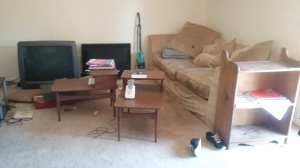 Something tells me if I just knuckle down and get to work it will be done. However, I’m in reading mode right now. Those who know me can tell you when I get into a book, I don’t stop until it’s done. And then there’s another one waiting. I’m blaming Kindle Unlimited. LOL

I never got any serious offers for the RV so I took it to the professionals. I have it on consignment at Garrett Camper Sales. They will keep it over the winter and if it doesn’t sell I guess I’ll have to store it. Or lower the price. “sigh”

I know I mentioned traveling up to Maine but after researching New England campgrounds, I found they are all closing for the season. So instead of opting for motels, I will be heading south on the next trip. The Biltmore Mansion in North Carolina has always been on my bucket list, so, yeah, there’s a destination.

I did pick up a couple of things to add to the travel gear. A sleeping bag and a tent. It’s one of those dome-shaped ones with the poles attached so all you have to do is unfold it and slide the poles open. Kind of tricky folding it back up to make it fit into the carry bag.

If anyone has suggestions for places to see in NC, let me know.

I’m back from the Brown County camping trip and pretty tired. Yesterday was fun though. My sister and brother came over from Cincinnati to visit. We ate lunch at the Lodge, which serves a very nice buffet. Then drove through the park. We were going to shop in Nashville but by then it was pouring rain so they went home and I decided to head back to Fort Wayne.

I did stay in a motel last night cause driving in a downpour is no fun.

Lessons learned:
I took way too much stuff. I will spend this weekend paring down my gear and clothing. I’m considering getting a popup tent so I won’t need so much bedding.
Hiking is hard for me. I think one hike week will be my limit for now.
Rethink food. One cooked entrée per day is enough. The rest of the day can be finger food and things I don’t have to heat up, fruit, veggies, sandwiches, cheese, etc. And I’m actually drinking less coffee! (I know, I know, you never thought you’d see the day…)

First thing this morning I needed to recharge the battery in the laptop. The electric box by my campsite was broken, so I had to go across the road and borrow theirs.

Then I decided to find the other lake in the park, Ogle Lake. The trail around it was marked moderate. With enough Aleve and Icy Hot lotion I figured I could do anything.Here are some impressions:

Country Lane in the Middle of the Woods

Then it was lunchtime so back to the campsite for chili and crackers. Caught up on some TV via Hulu and my hot spot. A storm was brewing so I laid this old tired body down and took a nap.

Here’s my arsenal for hiking.

The next income I get is going for some hiking shoes. and maybe a walking stick.

Correction from yesterday. The name Abe Martin is the cartoon character created by Kin Hubbard. From Wikipedia:

For twenty-five years, from 1905-1930, “Abe Martin” was the mouthpiece for Kin Hubbard’s daily quips in The Indianapolis News, which, accompanied by sketches of Abe and his friends in action, were syndicated across the nation. Hubbard was born in Bellefontaine, Ohio, and settled in Indianapolis, starting the Abe Martin Character in 1904. At first Abe Martin belonged to no particular locality, but on February 3, 1905, he announced,”I’m goin’ ter move ter Brown County Tewmorrow,” and the next day he was depicted in a wagon piled high with household goods.

More on him here on the Brown County website.

Today was spent exploring the park. Such beauty! Lots of hills. Roads are steep but the van made it effortlessly. (Still need to name him)

And would you believe – I attempted and finished a trail designated rugged!

When I hiked down to Lake Stahl I knew getting back up would be a challenge. So I took it very slow and stopped a lot. Made the mile hike in two hours. Not bad for an old woman with leg muscle weakness, eh?

I then toured the park in the van, stopping at a few vistas. I never knew Indiana looked like the mountains. 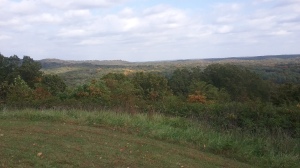 Stopped in at the Lodge, named for Abe Martin. Apparently he was a cartoonist and radio personality in the 1920’s who made Brown County famous. Using the free Wi-Fi here to post this and check email.

Tomorrow is supposed to rain so I’ll work on the books.

Scored a sweet little primitive site for 3 nights. This area is on top of a ridge with steep downgrades on either side. Looks like I’m the only one without a tent around here. But it’s cool and sunny and the wind sounds lovely

If you’re wondering what kind of set up I have, here’s the living room/ kitchen: 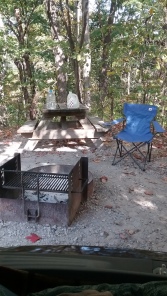 And here’s the bedroom:

Supposed to rain the next two days so I’ll see what Nashville, Indiana has to offer. I drove though Nashville on the way here and was not very impressed. Cute little shops but TONS of people roaming the streets. Parking not close either, so I’ll have to see how my legs are feeling before I commit to walking. But there is one place I need to go into. A candy making shop featuring fudge. We’ll see how it stacks up to Mackinac Island fudge which is still my favorite tourist candy.

Wish I could walk the trails here, but the park is mostly on top of and down the sides of a  mountain. So not very easy to hike. BUT…they have horseback riding tours. To be decided whether I’ll splurge the $16 for one.

Now that I’ve got my van, I need somewhere to go. I have lived in Indiana 38 years and never went south. Brown County State Park has always been on my bucket list, so here I go.

Packed the van with clothes, food, a bedroll, camping cookware (remember Girl Scout Camp?), and electronics. I might stay in a motel some nights, depends on how I sleep. I would love to boondock, but don’t know if it’s allowed. If not, there are several campgrounds, I’ll just grab a primitive site.

Trying to sell the trailer. Not sure how soon that will happen, giving that the travel season is over. I’m thinking of seeing if a car lot would take it as a trade in for a car.

Other than that, I’m still loving retirement. Reading, watching movies, writing a little and emptying my apartment are keeping me busy.

My car is officially out of commission for pulling an RV. So I have decided to go another route. I’m selling the trailer and buying a small car to travel in. I will still live in Fort Wayne, taking trips of various lengths.

On the writing front, I am still working on the trivia books and have started a novel.